Why We Will Likely See More Women in Male-Dominated Industries

Women and men are almost equally represented in the overall United Sates labor force, but men still hold the majority of jobs in certain industries. In addition, overall median earnings for women continue to lag behind men’s overall median earnings. Coming changes in the available workforce may result in increased percentages of women employed in traditionally male-dominated industries such as manufacturing, utilities, and higher education staff (those employed in skilled crafts, facilities, and service/maintenance).

Women currently make up 46.9% of the overall workforce, but hold only 29.2% of job positions in manufacturing and 21.4% of positions in utilities, which includes electricity generation / delivery and water / wastewater management. Women and men are more equally represented in higher education staff, however salary differences between women and men in the industry increase the longer an employee holds their position. Salaries for men on higher education staff increase steadily based on years in position, while salaries stay mostly the same for women who have been in their positions for 8-22 years, creating a wage gap that increases with the number of years in a position, and is similar to that seen in the overall workforce, where women’s earnings are 83% of men’s.

The overall U.S. workforce is getting older, with 23% of workers currently age 55 or older, compared to 12% in 1995. Primarily Baby Boomers born between 1946 and 1964, these workers are increasingly approaching retirement age and leaving the workforce. Generation X, born between 1965 and 1981, is almost 30% smaller than the Baby Boomer generation, leaving fewer skilled workers to step into open positions. With 30% more members than Generation X, the Millennial generation, born between 1981 and 1996, is poised to fill many of the positions left by Baby Boomers exiting the overall labor force. However, previous shifts in the American educational system away from teaching trades and toward a focus on academics have resulted in fewer students learning vocational skills and being exposed to careers in skilled crafts.

Millennials will soon be the largest living generation, outnumbering Baby Boomers, but executives are concerned about the significant skills gap between the generations. In fact, more than half of the available manufacturing positions in 2028 could go unfilled due to talent shortages. Like manufacturing, the utilities and higher education staff industries have higher than average percentages of older workers, and will be strongly impacted by these changes in the number of skilled workers available to fill positions left by retiring older workers. 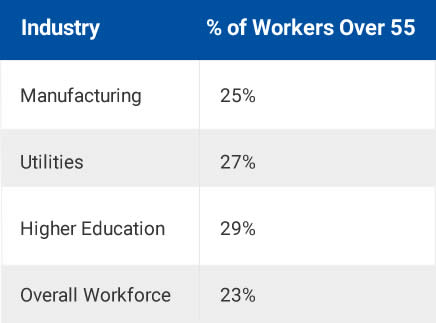 The challenges of an aging and changing workforce provide an opportunity for the number of women working in traditionally male-dominated industries to increase. In the face of continued high unemployment rates and positions left open by retiring workers, employers in manufacturing, utilities, and higher ed staff, are looking for new strategies to manage talent shortages. Many organizations are seeing benefits from efforts to retain and recruit skilled women. A growing body of research shows that more gender-diverse companies often financially outperform competitors. Gender-diverse companies tend to raise more average revenue and perform better in average relative returns. These companies also have high employee satisfaction and retention rates, reducing the costs involved in recruiting and training new employees.

A majority of surveyed manufacturing executives stated that on-the-job training and in-house learning are the preferred learning methods for developing employee skills. Long-term employees have acquired valuable knowledge and skills, and can act as experienced mentors and trainers for other employees. Efforts to fill skilled job openings in manufacturing, utilities, and higher ed staff can also help close the wage gap between women and men, as employers recognize the opportunity to offer higher wages to both keep and attract talent.

In addition to changes in the workforce, advances in technology and automation are changing the skill sets needed in these industries. Traditional vocational and technical skills remain important in manufacturing, utilities and higher ed staff, but the growing adoption of digital technologies in these industries is reducing overall demand for those skills. Computer skills are increasingly important as workers need to be able to perform tasks such as programming industrial machines or interacting with engineering software like CAD (computer-aided drawing). In addition to digital skills, the demand for human skills, or “soft” skills, is growing.

Employers are looking for workers who possess skills such as critical thinking, creativity and originality, problem-solving, and people management. These skills are less industry-specific, leading to efforts to attract women employed in other industries, especially to managerial roles. Having women visible in senior roles also attracts other skilled women to companies, helping to fill the talent gap. In the end, changes in the types of available employees as well as evolving technology may result in more women employed in traditionally male-dominated industries.