Mean Time to Failure (MTTF) is a failure metric that measures the average amount of time in hours that a non-repairable asset operates before it fails. Since this metric applies to assets that cannot be repaired, MTTF can also be thought of as the asset’s average lifespan. Here, “failure” refers to any disruption significant enough to result in unscheduled downtime or prevent an asset from functioning as intended.Non-repairable assets usually refer to inexpensive or easily replaceable components or parts, such as a fan belt, transistor, or the roller on a conveyor belt, which degrade with use. Some assets, such as light bulbs, become depleted after extensive use and simply cannot be repaired.

Generally, technical teams aim to extend MTTF as long as possible. The longer the interval between part failure, the less frequently parts need to be replaced, the less time teams spend replacing parts, and the less money the organization spends replacing physical components.

Ultimately, however, the goal of maximizing Mean Time to Failure is to reduce unscheduled downtime. A longer MTTF means teams are less likely to be caught by surprise when a machine fails. Remember, while non-repairable assets might cost a few dollars apiece, they enable large, high-value assets to run.

The bottom line: Tracking and optimizing MTTF is an important part of ensuring production continuity and reducing downtime.

To calculate Mean Time to Failure, you need to have historical data on a group of identical parts by the same manufacturer to compute an average. This means you must keep a record of how long each part lasted before device failure occurred. If you were comparing bearings, for example, make sure they are the same type (eg: all of them are ball bearings) and have the same rotation speed and sealing system.

Mean Time to Failure Example
Say you have five bearings. Take the average amount of time in hours each bearing lasted (45, 50, 35, 40, 47), and divide by the number of bearings, which is five. The MTTF is 43.4 hours

It’s harder to measure Mean Time to Failure for parts with an extensive lifespan because it takes more time to acquire historical data on part failure. Consequently, MTTF reliability tends to decline as parts last longer.

Why Does Mean Time to Failure Matter?

The MTTF formula plays a major role in incident management. Tracking KPIs for incident management can help companies diagnose problems with systems and processes. Mean Time to Failure in reliability engineering is a widely used concept (the application of best engineering practices to enable equipment to function without failure).

Seeing as Mean Time to Failure measures the average lifespan of a nonrepairable asset, it serves as a fairly accurate proxy for a part’s reliability. A low MTTF might be a sign your organization should switch suppliers or purchase better-quality parts in exchange for a longer MTTF and cost savings in the long run. Mean Time to Failure is an indispensable metric because you’re tracking the small, replaceable parts that keep your large, high-value asset running.

How to Use MTTF

Like any maintenance metric, Mean Time to Failure is only useful if it results in changes to business processes. It can be used to improve a number of things, including better inventory control, more accurate preventive maintenance schedules, and reduced maintenance spending. Here are a number of ways to use MTTF to your organization’s advantage.

Knowing when a part is expected to fail empowers teams to better manage their inventory and avoid overstocking or understocking replacement parts. Tracking MTTF can help organizations establish a just-in-time inventory management program (working closely with suppliers so that materials arrive as production is scheduled to begin but no sooner). The goal is to have the minimum amount of inventory on hand to meet the demand for improved cash flow and lower inventory costs.

Parts with a low MTTF fail quickly and cost the company more money in the long run. You may want to consider switching suppliers or ordering a slightly more expensive part that lasts longer.

You don’t need to be in the manufacturing industry to use Mean Time to Failure to your benefit. In the software industry, DevOps teams use MTTF to measure the average amount of time between when a DevOps team encounters a defect serious enough to cause a system to fail. Mean Time to Failure is used to track the status of non-repairable system components in mission-critical systems and determine how long a component will operate before it fails. DevOps teams use MTTF to prepare for system failures and to understand the reliability of their most important systems. They then use the data to find ways to limit the risk of costly system failures.

How to Improve Mean Time to Failure

The goal of tracking Mean Time to Failure is to maximize it so that your organization can spend less on replacement parts and reduce unscheduled downtime.

Purchase high-quality, durable materials with extended useful life. MTTF should take precedence in the O&M decision-making process. Skimping on parts procurements will lead to downtime and lost revenue in the long run.

Use assets only for their intended function

Ensure that the conditions such as voltage, pressure, heat, and humidity are right. Always have assets installed by qualified professionals.

Synch up your preventive maintenance schedule

MTTF can help inform preventive maintenance schedules for non-repairable assets to prolong their life cycles or tell you when to replace parts ahead of anticipated asset failure. PM activities such as cleaning and lubrication can extend a part’s lifespan.

If you want to streamline your maintenance operations and reduce equipment downtime and maintenance expenses while prolonging the life of assets, be sure to check out our industry leading CMMS software. We offer the most powerful, flexible, and easy to use CMMS software on the market today! 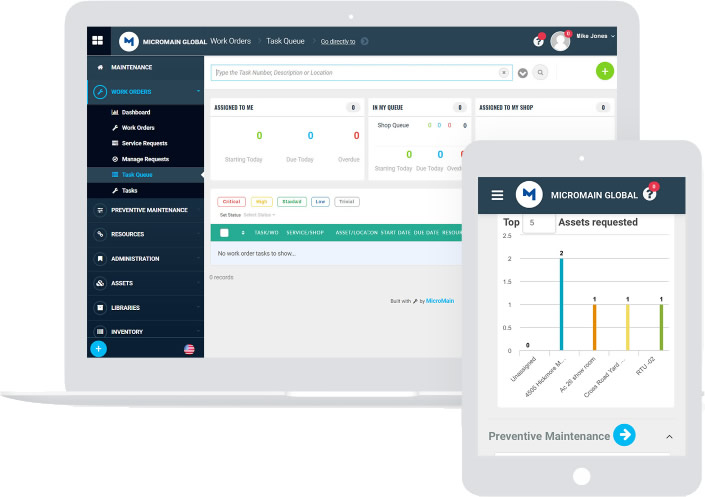 What is The Difference Between MTTF and MTTR?

Mean Time to Repair (MTTR) is the amount of time needed to repair a failed asset. Keeping MTTR as low as possible reduces downtime and the cost of installation. MTTR may be high due to understaffing or poor inventory control because of the time it takes to order a replacement part and wait for it to arrive. To reduce MTTR, many companies purchase spare parts so a replacement can be installed expeditiously.

What is The Difference Between MTTF and MTBF?

Mean Time to Failure and MTBF (Mean Time Between Failures) are closely related. While MTTF describes the average time before a non-repairable asset fails, MTBF measures the intervals between failures for assets that can be repaired, also measured in hours. A high MTTF for the component parts of a large, mission-critical asset can improve the MTBF of that asset.